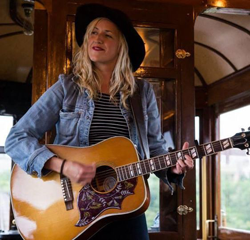 Justine Vandergrift’s clear, rich voice and finely tuned song-craft bespeak an affinity with the likes of Patty Griffin, Bonnie Raitt, and Sarah Harmer, but her own brand of country soul has deeper roots than that, ones that dig into the hymns and folk songs of her central Alberta youth. Her three studio releases reveal a rare and irresistible knack for melody, and her recent release, Stay, represents a deepening of that artistry. Justine is like the old hymns she grew up with—even if you can’t quite put your finger on what makes them genuine and authentic, they are undeniably so.

Justine Vandergrift is an emerging artist with that most precious and rare gift—an original voice. It’s hard to capture such things in words but hearing is believing.
—Stephen Fearing

Occasionally a new artist emerges that immediately demands respect and attention. Justine Vandergrift is one such artist. She will make a solid impact on anyone who has the privilege of hearing her songs.
—Bill Bourne

Every once in a while, we’ll come across an artist who truly connects us to their spirit. Sometimes it happens in a large concert setting and sometimes, as in my case, it happens around a campfire. With only one song, Justine displayed her ethereal voice and imaginative lyrics to connect with with those of us privileged to be there. It was my wish that someday people might share in what we felt that night. A true artist deserving of much wider recognition!
—Jay Amar

In an industry glutted with splash in the pan artists, Justine Vandergrift stands out as a genuine talent who is in the music business for the long haul.
—Rhea March, Host & Producer of Almost Famous on CKUA Radio Network  and It Takes A Village on CJSR Radio.